A few months ago, I had the opportunity to fly on United Airlines from Frankfurt, Germany (FRA) to Washington Dulles (IAD).  This was my first long haul experience with United, as well as my first trip on a Boeing 777.

As I approached the gate in Frankfurt, I realized I had roughly 30 minutes prior to departure and sat in the boarding area.  It was slightly eerie, as there was nobody else sitting around me.  I approached the gate agent to confirm that I was in the right area for my flight back home.  She told me that the flight was very light, and I could actually board early if I would like.  I took advantage of this opportunity to settle in early, and boarded the aircraft.

While I boarded the aircraft, I was expecting similar service like I had received on Lufthansa.  By this I mean cheerful flight attendants that greet you and point out where your seat is located.  Sadly, I did not encounter this type of service.  I cheerfully smiled and said ”Hello” to each of the three flight attendants while I made my way to the seat.  None of them cracked a smiled, and only responded with a forced sigh and “Hello” back to me.

My seat for this flight was located in the very last row of the aircraft.  I looked around, and there was not a soul nearby, except for the young gentleman one row up and across the aisle. Not long after boarding, they closed the cabin doors, and our flight back to the United States was under way.  The flight attendant made her welcome announcement, and was probably one of the most unenthusiastic and uninviting announcements that I have ever heard.  At this point, I could only imagine what the inflight service would be like as well, because I now felt that I had been spoiled with the high level of service that I received from Lufthansa on my way over to Europe.

The in-flight entertainment was just as bad as the service that I would receive on this flight as well.  There were (3) seats in my row, and two of them had broken headphone sets.  I politely asked the flight attendant for a working set, and her only response was “I don’t know.  I’ll see what I can do”.  45 minutes later, the flight attendant reappeared and said “here”, while throwing the headphones at me.  I was shocked and appalled!  Out of the 3 in flight entertainment units, only 1 was working.  It also had a tendency to freeze up with errors and reboot every 15-20 minutes.  This was going to be a LONG flight home…

I was pretty hungry and we were served a soft drink and snack.  I had asked for Coffee and Water, and an extra bag of pretzels.  The flight attendant rolled her eyes, and granted my request.  I was getting pretty upset with their service and wanted to complain so bad!  The meal we were served was pretty awful, but I ate it anyway.  Not everyone can have the same quality of food as Lufthansa I guess.

Finally, after many many hours of flying, we landed in Washington Dulles Airport.  I was so happy to get off my flight and be one step closer to home.  Honestly, this experience on United Airlines was pathetic and terrible.  I will never fly United Airlines on a long haul flight again.  Take my advice, and spend the extra money to fly on a European airline, as they tend to value service and the customer more than US airlines. 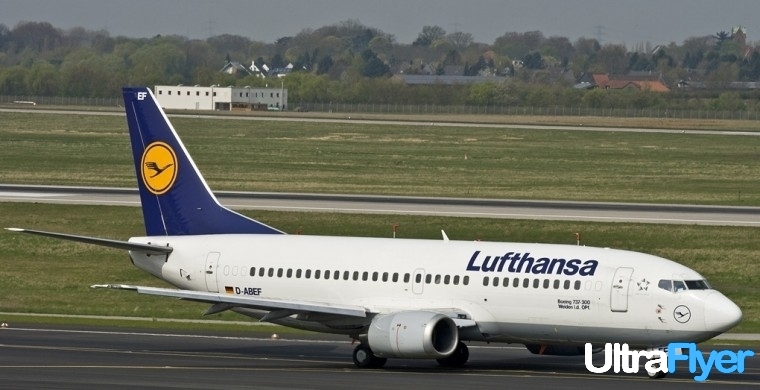 This very brief flight on Lufthansa would take us from Frankfurt, Germany (FRA) to Zurich, Switzerland (ZRH).  Prior to this flight, my friends and I were traveling on United Airlines Flight 932 – Washington Dulles (IAD) to Frankfurt, Germany (FRA).  After landing, we rush through security as fast as we could, but the lines were terrible.  We were fortunate to make it to the gate just in time for boarding to begin.  We literally had to run from one end of Frankfurt to the exact opposite.

Once at the gate, my one buddy named Matt needed to pick up his boarding pass, as they were not able to generate it for us in Pittsburgh.  The gate agent told us that they were not sure if he could take this flight.  Our hearts fell.  We had to make this connection.

Luckily, the gate agent was able to get Matt on, and away we went!

I found my seat in the aisle (22C) and quickly sat down.  Push back was on time as well as our departure.

Due to the short duration of the flight, only water was served to passengers.

Upon arriving in Zurich, Switzerland, we could breathe a sigh of relief.  We had arrived at our main stopping point.  It was 2pm, and our flight the next day departed at 5:55am.  We had roughly 16 hours to kill in Zurich.  What to do? 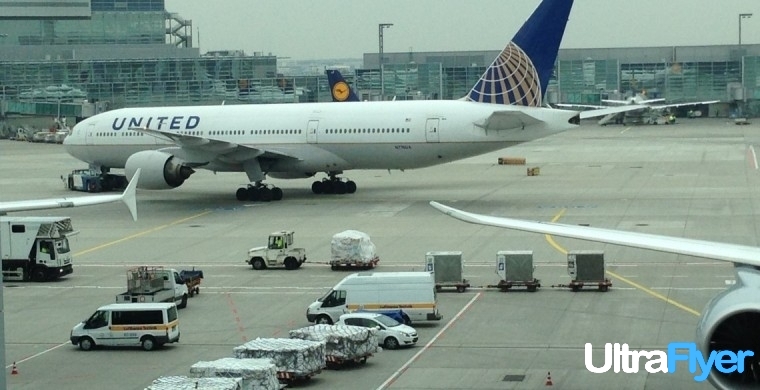 I am a Premier Silver Member on United Airlines, and do a majority of my traveling on United or one of their Star Alliance partners (Lufthansa, Swiss, etc).  This flight was part of my journey with some friends from (Pittsburgh – Washington Dulles – Frankfurt – Zurich – Kos).

Boarding in Washington Dulles (IAD) began promptly at 9:15pm.  Since I am a United Cardholder, I was given preferred boarding in Zone 2, which is a nice little perk on long flights like this.  Our total flight time for today was slated at just over 7 hours.

Upon boarding the aircraft, I located and sat down in my seat (aisle 44C).  This seat was located at the very rear of the aircraft.  I was traveling with two other friends who didn’t board for quite a while since they were in Zone 5.  This is why I love having the United Credit Card.  It’s the little things that matter.

Our United Airlines flight pushed back on time, and once airborne, the flight attendants came around with the complimentary crackers and cheese, along with coffee / beer / alcohol.  United Airlines recently changed their policy on alcohol and no longer charge for it on international flights.  I rarely drink on a plane, so this isn’t a big deal to me.  However, my friends rather enjoyed the complimentary alcohol.

Our flight was about 70% full this evening, so there were a number of seats open.  The flight attendant who served us on this flight was absolutely amazing.  She was kind, funny, and willing to help however she could.  This is in contrast to the typical flight attendant that I experience on United, which is cranky, crabby, and just all around hates every passenger on the plane.

Meal service was provided, and I opted for the chicken.  After dinner, we were served ice cream, and our flight attendant gave my friend Matt a small bottle of liquor to add to his ice cream.  She was awesome.

We played a few games on the in-flight entertainment system, and then tried to get some sleep.  It was hard to sleep knowing that in just a few hours, your friends were going to experience Europe for the first time ever.  I am a veteran on traveling abroad (as I make about 2-3 trips to Europe each year), but this was their first.

Our flight touched down smoothly a little before 12pm local time.  We taxied for quite a while, and parked in a remote position on the stand.  Our Boeing 777 deplaned using the front and aft cabin loading stairs.  I had never deplaned on stairs from an aircraft this large before, so it was quite the cool experience.

After this, we were bused to the main terminal, and then began an all out sprint to the opposite end of the airport to catch our next flight.  Lufthansa Flight 1190 from Frankfurt (FRA) to Zurich (ZRH).

In conclusion, I would rate this experience on United Airlines Flight 932 (4 out of 5 stars).