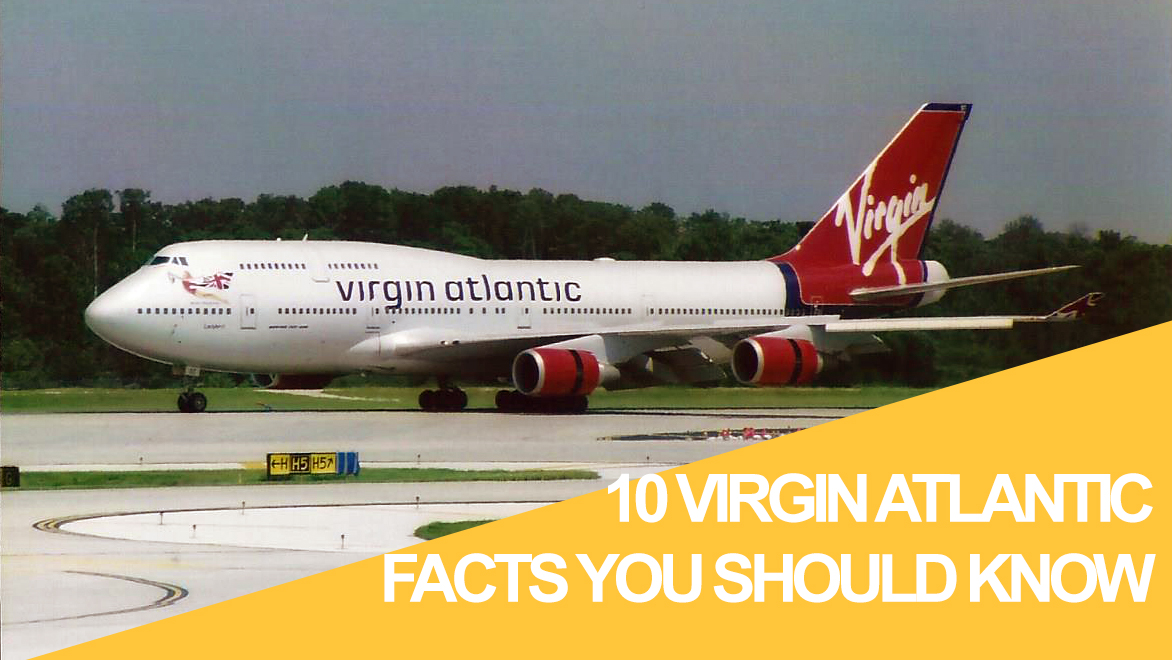 Virgin Atlantic Airways is a British airline that was founded in 1984 by entrepreneur Richard Branson. The airline currently has a fleet of 44 aircraft and reaches 33 destinations around the world.

While trying to set themselves up to be unique, Richard Branson thought it would be a good idea to name coach class “Riff Raff”. Fortunately, this idea never came to fruition, and coach was aptly name, “Economy”.

Virgin Atlantic is one of the last airlines in the world to operate the long bodied Airbus A-340-600 aircraft. The planes were due for retirement, however, due to the issues with the Boeing 787 and wait time for the Airbus A-350, these planes will see a little more time in the air between London and the rest of the world.

Just like its main competitor British Airways, Virgin Atlantic splits their flights in London up between both Heathrow and Gatwick airport. The flights from Heathrow Airport are more geared towards the business traveler with destinations such as New York, Washington, Los Angeles, Shanghai, Dubai, and more. The flights from Gatwick Airport are more geared towards the leisure traveler with destinations such as Cuba, Barbados, etc.

The airline also has a third base of operations and this is located in Manchester. These flights are a mixture of business and leisure travelers with flights to New York, Orlando, Las Vegas, etc.

Virgin Atlantic Does Not Have A Short Haul Fleet

Most airlines feed their long haul flights with ‘feeder’ flights from other cities to their main hub. This helps to ensure the large aircraft are filled each flight to reduce costs and increase profitability. Virgin Atlantic does not utilize any short haul aircraft and relies solely upon passengers beginning and ending their flights in the destination and/or arrival city. Virgin Atlantic did operate a short haul airline named Little Red for a few years, but this idea was put to rest in 2015 due to the carrier operating unprofitably.

In October of 2012, a woman flying from London to Johannesburg gave birth to a baby boy en route. The second occurrence of a birth on board was in May 2004 during a flight from Lagos to London.

The Longest On-Board Bar In The Sky

Passengers booked in “Upper Class”, the First Class equivalent on Virgin Atlantic can drink at the world’s longest bar in the sky. The bar was introduced in 2012 and measures almost 9 feet in length. The bar is also covered with over 1,000 Swarovski crystals and beams colorful LED lighting to give you that ‘night club’ feeling 30,000 feet in the air.

Virgin Atlantic Was A One Year Experiment

Richard Branson, the founder of Virgin Atlantic, has a firm belief that if a business doesn’t succeed after the first year, scrap it and move on to the next idea. While airlines typically take years to build a loyal following, Branson saw that Virgin Atlantic turned a nice profit it’s first year, and used that as proof to expand the airline with additional 747 aircraft and by adding routes to new cities like Florida, Tokyo, and Los Angeles.

The original founders of Virgin Atlantic did not include Richard Branson, but included two men named Randolph Fields and Alan Hellary. Their idea was to create a new airline named “British Atlantic Airways” and operate flights between London and the Falkland Islands in 1982, right after the Falklands War had finished. However, after realizing the runway was too short in the Falklands, the idea was deemed unviable and soon scrapped.

The pairs next idea was to obtain a McDonnell Douglas DC-10 aircraft and operate flights between London Gatwick and Newark, New Jersey. However, they decided that they needed more funding to compete against low cost US airline PEOPLExpress, which is how they came to find Richard Branson.

Virgin Atlantic operates six types of aircraft in their fleet. They consist of:

When you think of the United Kingdom and Airlines, the first thing that comes to mind is likely British Airways. With this in mind, the marketing folks at Virgin Atlantic knew they had to be a little over the top to get noticed, and created some pretty interesting slogans for their marketing campaigns. When the airline began to offer on-board massages, the slogan was, “BA doesn’t give a shiatsu”. When the airline began to offer seatback games on board their aircraft, they released the slogan “Play with yourself”.